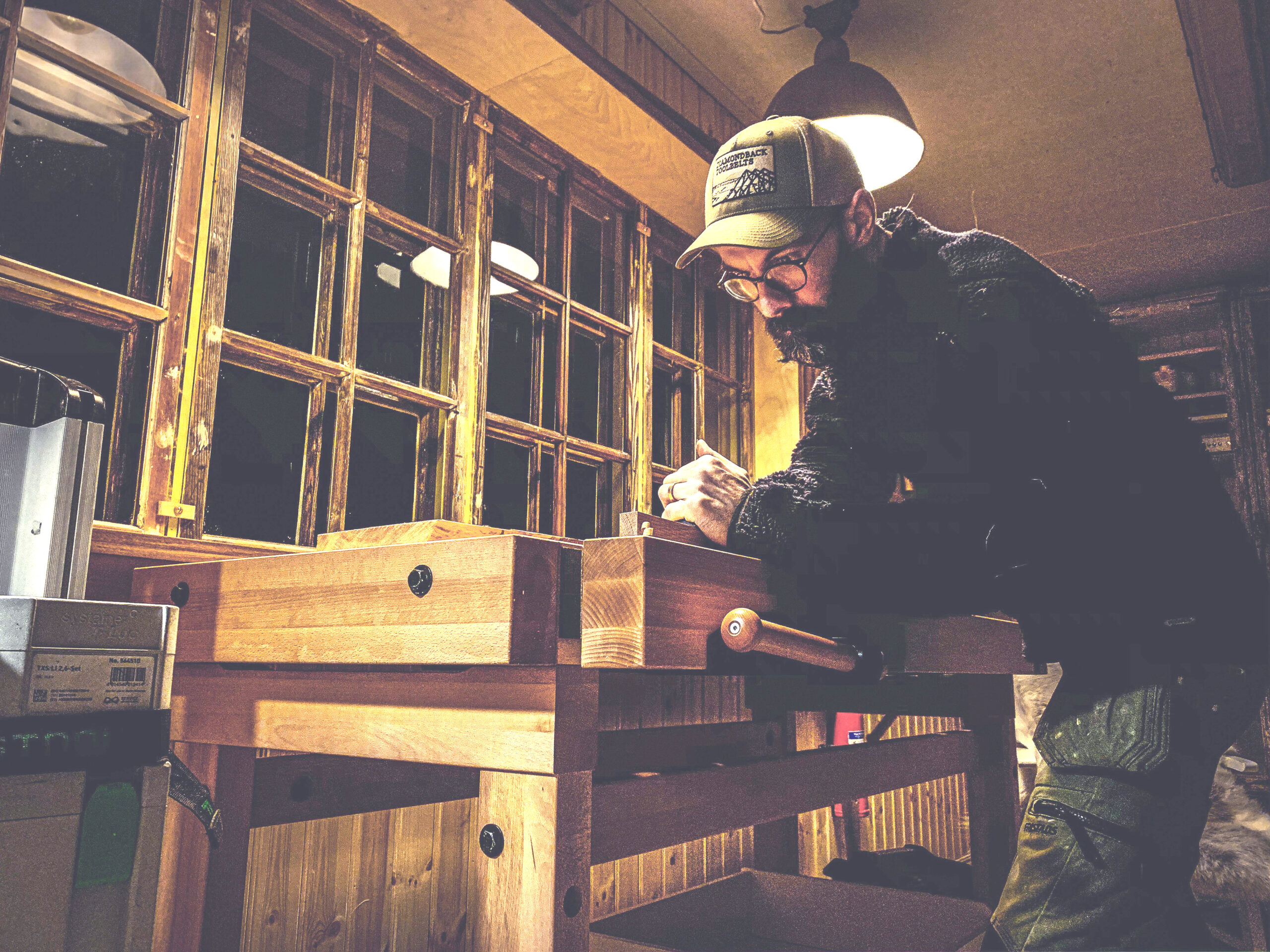 Oskar Boström and his passion for boats and Swedish pine

With over 8500 followers on Instagram, Oskar Boström has made a name for himself as a carpenter with his account, @Oskarsnickrar. Oskar posts idyllic pictures and films from his carpentry projects which in turn inspires his followers in their own creative projects.
Oskar grew up on the Mälaren islands outside of Stockholm.  From an early age he spent time with his father, who renovated veteran boats in his spare time.
-I was very fascinated as a child to be in that environment, and those experiences with my father definitely laid the foundation for my interest today.
One of the projects in Oskar’s newly renovated workshop in Umeå (which of course has a Sjöberg bench) is precisely to renovate an old Lake Express boat from the beginning of the 20th century.
-It really is a trip down memory lane to the old boating life.

1. You have previously been in the TV / Media industry but suddenly chose to make a change. Why?
– All of the sudden, I felt ready. I wanted a new challenge and some freedom.  I still have with me my years in the media which are  very valuable – as I still think it is fun to photograph, film and write.

2. What type of wood do you prefer to work in?
– Oh, that’s a difficult question. I have periods when I am completely manic about plywood which can suddenly end in an obsession for Swedish pine … and then hardwood, mahogany or some other type of wood. It changes. It also is influenced by what assignments I have there and then.

3. What was the last project you did that felt was really, really fun?
– A really fun project was building a rudder cult in mahogany. It took me down memory lane to my previous boating life.

4. We who follow you on Instagram have seen that you are renovating a boat now. What is the first trip going to be when it is finished?
– Yes!  What a project… It is a Sjöexpress built in 1924 with the name Trygg. The ultimate goal is for her to be on the lake in four years, when she turns 100 years old. Anything before that is a bonus, and I have not yet decided where the first trip will be.

5. A little bird told me about a temporary comeback in the media industry in a TV show this fall?
– Yes, it’s fun. SVT got in touch and wanted to make four features with some carpenter’s tips. I thought it sounded exciting and jumped at it. The features were recorded in May and June and will be shown on Go´kväll during the autumn. Watch for it!

Sonja shares her joy of creating with her students and followers

We are now launching a new flexible workbench for schools

Alexander has found his way back to the joy of creativity

Oskar Boström and his passion for boats and Swedish pine

Allow us to present our latest woodworking bench

How to choose the right workbench

Creative news to your inbox